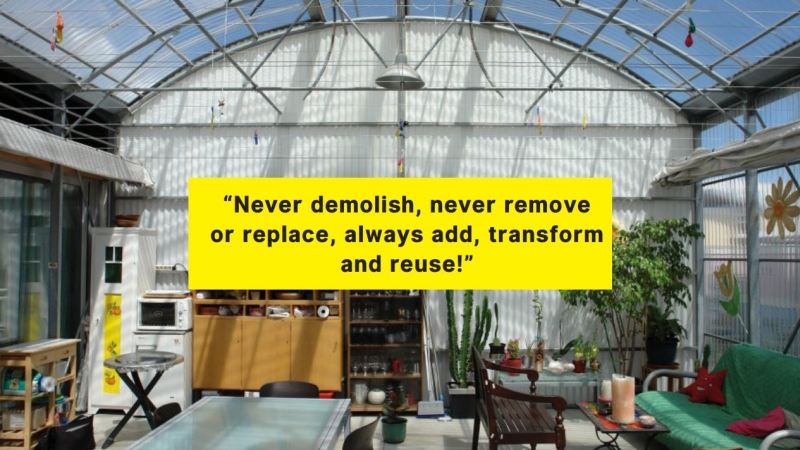 As every year, our programmes – Theory Competition and Practical Scholarship – attracted a number of creative and courageous architects eager to enrich the architectural debate by approaching important contemporary topics and values in a fresh and unconventional manner. Although the themes of the competition entries remained diverse, deep concern for the increasingly degraded environment clearly stood out in this year’s edition.

The Jury of the THEORY Competition, including Ewa P. Porębska, Agnieszka Jacobson-Cielecka, Grzegorz Piątek, Jacek Purchla, Bogna Świątkowska, Marta A. Urbańska and Piotr Sarzyński, awarded the main prize to Marcin Kitala and Zygmunt Maniaczyk – the authors of the text Extra Muros, which presents the vision of sustainable tourism in relation to information culture. “EXTRA MUROS raises the very topical issue of tourism, which until a year ago was one of the main developmental factors for as well as a threat to our cities. The global crisis – the pandemic – has put us in a Socratic situation, so to speak: we know that we know nothing about the future. However, the authors made an effort to diagnose the state of tourism before the catastrophe, to describe the status quo, and to make an attempt at foresight. They postulate a revival of tourism supported by online information, virtual reality, and exploration of our local surroundings to balance the need for freedom with responsibility for the environment. Besides its intriguing theme, the work has one more great advantage: somewhat abstract, charming illustrations. It also has a beautiful conclusion: “By generating a microcosm driven by human dreams, we lay the groundwork for the emergence of the multiverse – a reality that draws on all richness and respects all beauty.”- this is how the Jury justified their verdict.

This year, the THEORY Jury also awarded two distinctions: the First Degree Distinction for the work “Modernist Avant-Garde towards the Culture of Capitalism, as an Inspiration for Shaping the Vision of the City of the Future” by Karolina Szczygieł, alongside the Second Degree distinction for the text “How women teach us space…” by Mikołaj Twardowski.

Meanwhile, the Jury of the PRACTICE Scholarship, which included Dorota Szlachcic, Jakub Wacławek, Aleksandra Wasilkowska, Maciej Frąckowiak, Konrad Grabowiecki and Agnieszka Olędzka, selected Sandra Przepiórkowska, the author of the PLASTOPIA project, out of the group of finalists who have earlier been offered a two-month scholarship.  The winner, who will now begin her next scholarship lasting six months, will be working on the development of her project with the support of the Jury. The Jury justified their choice as follows:  “What we appreciate in this idea is what we love in architecture today – confirmation that great design can be about reflection on the material and its processing technology. We appreciate the fact that the discussions about plastic in recent years have not discouraged the author, and – instead of trying to force innovation – she has been encouraged to consistently search for a way to actually work with it. The project is therefore sensitive and at the same time modest; it deals with big topics, but at the same time it fits in the palm of your hand. The project interweaves chemical and social processes in such an important public space as Katowice, which calls for socialisation. The presented timetable also reassures us that the project is likely to develop substantially in the coming months, especially in terms of cooperation with stakeholders and local communities. Therefore, we can educate not only inhabitants but also architects.”

This year our Foundation has organised the eighth edition of the Theory Competition and offered the PRACTICE Scholarship for the sixth time. The outcomes – the book launch and the complete project – will be revealed as soon as this autumn.

„We aim to support innovative thinking, ambitious young people who come forward with bold and at the same time socially responsible architectural work. We promote architects who are attentive observers of the contemporary reality and who adapt their work to the needs of users,” says Prof. Ewa Kuryłowicz, Chairman of the Board of the Stefan Kuryłowicz Foundation.