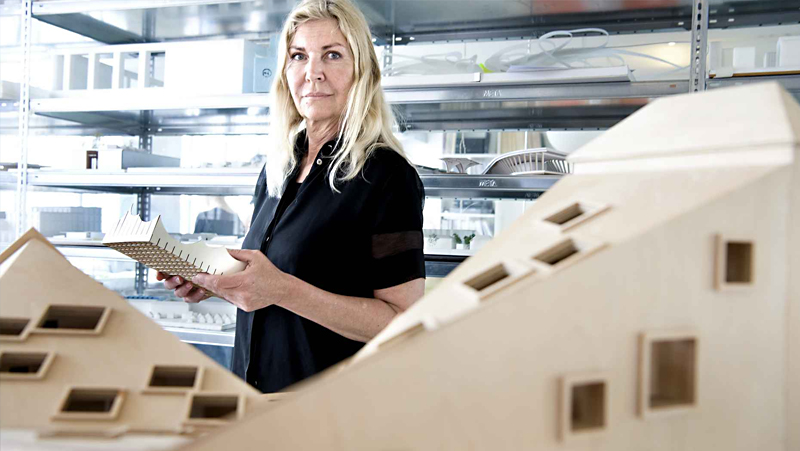 Breaking through worn-down patterns. Seeking untrodden paths. Working contrary to convention. This is one page of the architectural lexicon of Dorte Mandrup, a Danish designer, creator of innovative designs, which are often mad and always captivating. The second page comprises deep preparation, reconnaissance of the social and natural conditions of the space and a completely pious approach to detail. A simultaneously rebellious and broad-scale artistic vision bursts forth from her works, along with the need to respect the specific nature of a place, to understand its past and its full potential.

This tangle of the poetic and the prosaic was remarked by the jury of the international design competition for the Icefjord Centre in the UNESCO-protected region of Ilulissat in Greenland. Last year the studio Dorte Mandrup Arkitekter began working there on a new pavilion that is to combine an exhibition space with a place shared among local residents, tourists and climate-change researchers. The design is an homage to the incredible and raw nature of the Sermeq Kujalleq glacier. It fits into the unique atmosphere of this place, balanced at the juncture of nature and culture, telling a story of coexistence by people and an ice-frozen land. To portray the conditions of life there, the studio created the installation CONDITIONS, presented at the Biennale Architettura 2018. Today it can be seen in the Danish Architecture Centre in Copenhagen.

Active dialogue with space, not unilateral subjecting it to humanity, means the Icefjord Centre is the fifth design by Dorte Mandrup Arkitekter chosen for implementation by UNESCO. Other projects under the patronage of this institution include the reconstruction of the Wadden Sea Centre, an exhibition centre in a nature preserve on this broad intertidal zone in the south-eastern part of the North Sea. The design uses a traditional technique, dating back to the Vikings, of covering roofs with reeds. During her lecture in Warsaw, Mandrup will discuss the background of these projects, penetration into the context of a space and building a holistic concept based on analysis of the surroundings.

Dorte Mandrup founded her studio, Dorte Mandrup Arkitekter, in 1999; today it employs more than 70 people. For more than 20 years, this Copenhagen studio, bringing together architects from around the world, has not only developed a unique language of design, but also won recognition both from participants in its projects and from international architectural bodies.

Dorte Mandrup is coming to Warsaw at the invitation of the Stefan Kuryłowicz Foundation and the Architecture Faculty of Warsaw University of Technology. On 18 October at 6 pm she will deliver a lecture titled “Conditions”, part of the series “From vision to design”. The lecture will take place in the Faculty’s building at ul. Koszykowa 55.

The event will be accompanied by the launch of the book Terrain vague jako przestrzenie kulturotwórcze (Terrain Vague as a culture-creating space), published by the Stefan Kuryłowicz Foundation as part of the series Architecture of culture – culture of architecture; the authors, architects Małgorzata Neumann and Zofia Zuchowicz, won the Foundation’s Theory 2018 competition. There will also be a presentation of the final project, Oddział Warszawa (Convalescent Ward Warsaw) by the architect Agnieszka Dąbek, winner of the foundation’s Practice 2018 fellowship.