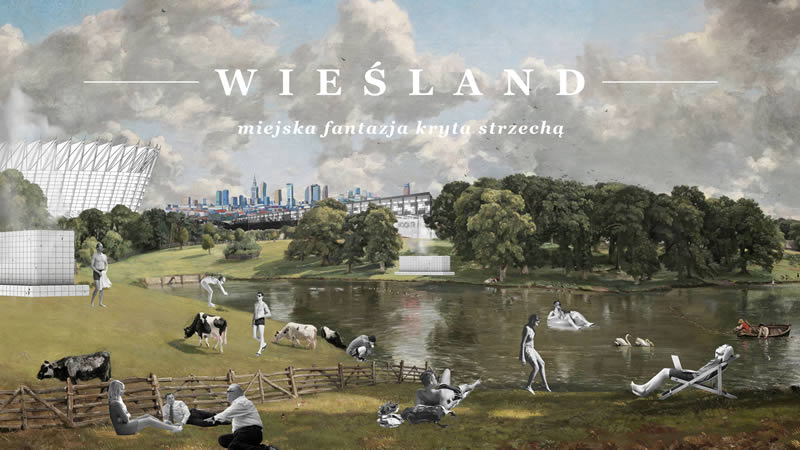 Can the pastoral idyll inspire modern architectural design? Can an audacious manifesto envisaging green pastures and a rural mill in the very heart of the city translate into an actual urban architectural structure?

It turns out to be plausible, as evidenced by the competition entrants who won double awards in the 2019 edition of our Foundation’s programmes. On March 26, 2020, they became the winners of both the THEORY Contest and the PRACTICE Scholarship Scheme.

Innovative architectural ideas, ingenious as they may be, are likely to inhabit the realm of unrealised dreams eternally if deprived of the practical angle. This year’s laureates of the Stefan Kuryłowicz Foundation programmes, an architect – Jan Scheliga and a sociologist and social anthropologist – Krzysztof Janas, went beyond the theoretical vision of a rural theme park when they entered the THEORY Contest. In parallel, they also submitted their architectural design and concept to win the PRACTICE Scholarship.

The entry describes the creation of the leisure infrastructure, blended into the rural scenery, in the vicinity of Warsaw’s National Stadium. The authors conjure up a vision of green space – complete with inns and a rural mill – where park visitors can actively participate in a pastoral idyll performance, one of a kind.  „In our work, we intended to signal the problem of the excessively accelerated pace of urban life with no available options to flee the urban race. This is how we arrived at the idea of creating a rural park in the city centre.”, says Krzysztof Janas. „Wieśland(…)”  was highly acclaimed by the Jury for its daring take on the link between the countryside and the metropolis. It was also recognised and praised for its attempt to incorporate architecture into the challenging socio-cultural patterns, which was further enhanced by the passion-infused and humourous language of description. The awarded text, with the breakthrough solutions described in impressive detail, will be published by our Foundation – in Polish and English – in the autumn of 2020.

Besides, the Jury also gave special accolades to two other entries: Mikołaj Twardowski’s „Zamieszkanie w niepamięci” (Eng. Inhabiting the non-memory) touches upon the vital topic of elapsing time and the ever-expanding socio-medical issue of dementia, including the Alzheimer’s disease, in the context of the architecture and our surroundings. Marta Wróblewska’s „Średniowieczne gender. Beginaż jako fenomen architektury mieszkaniowej” (Eng. The mediaeval gender. Beguinage a phenomenon of residential architecture.) presents an intriguing analogy between Beguines’ choice of „the third path” (which resulted in the creation of a new architectural form) and the needs of the so-called socially non-normative groups in the contemporary society.

The idea of the rural version of an urban theme park was appreciated both for its theoretical underpinnings and its practical aspects. The results of our Foundation’s  PRACTICE Scholarship Scheme prove that theory and practice should complement each other for the best outcomes. The Jury members, Dorota Szlachcic, Jakub Wacławek, Aleksandra Wasilkowska, Maciej Frąckowiak, Konrad Grabowiecki and Agnieszka Olędzka, awarded the winning prize to one of the three shortlisted entries – Jan Szeliga and Krzysztof Janas’ „Wieśland (Eng. Countryland), or an urban fantasy under the thatched roof.” In the final, the winners competed with Maciej Moszant’s work focussing on reducing the rate of road accidents involving pedestrians and Magdalena Orzeł-Rurańska and Kinga Kwaśny’s „smart” model of urban infrastructure.

The Jury set „Wieśland (…)” apart from other entries for the audacious hybrid of artificial folklore, which entices, fascinates and prompts reflection on the interdependence of the metropolis, nature and environment, alongside the connection between the central and the peripheral.  The convention-juggling design is likely to ignite the debate on the future of urban architecture and the forms of leisure available to city dwellers.

Apart from the scholarship, in the upcoming 6 months, the winners will be offered professional support to develop the design, its budget, timeline and strategic promotional campaign.

This year the Stefan Kuryłowicz Foundation has organised the 7th edition of the THEORY Contest and the 5th edition of the PRACTICE Scholarship Scheme. „We aim to support forward-thinking, innovative, resourceful, ambitious young people, who put forward bold and socially responsible architectural solutions.  We promote the architects who are acute observers of the contemporary reality, able to adjust their work to the needs of users.”, says Professor Ewa Kuryłowicz, The Head of the Board. The participants appreciate the opportunities emerging from the programmes and the prizes offered by the Foundation. „The THEORY Contest and the PRACTICE Scholarship Scheme create a unique socio-architectural platform for discussion, which is absent from implementation-focussed competitions. The programmes create opportunities for multi-dimensional analysis of a socially significant theme.”, says Jan Szeliga, the co-author of „Wieśland(…)” – the double winner of this year’s THEORY and PRACTICE programmes.

The launch of the next edition of both programmes is scheduled for the autumn of 2020, which is soon.